This Dress Has History!

This Dress Has History!
So, I decided to participate in a UFO challenge.  Those of you who are not familiar with UFO it means "unfinished object". In the sewing community this is not uncommon because there are tons of factors that will keep you from finishing a project.  Bad fabric, above your skill level, not enough fabric, doesn't work with this pattern or just plain old - I fell out of love with it and something better has come along!
I call it the "hell freezes over pile".  This dress landed in that pile in 2010.  Yup!! I said it 11 years ago.  So, through the years I have gotten stuck by it (I guess it was pissed at me. LOL!!), forgot completely about it, pulled it out and put it back, saw the ruffle cutting and just put it back. The list goes on!!  The reason I didn't toss it (like some of the other projects that landed in the pile) was the fabric. I loved the color of the fabric. I think I paid $1 a yard back then for it.
Anywhooo, I took it out the bin last summer during the pandemic and said "I'm finishing this Bitch!" It didn't happen. So, I was cruising Instagram stories earlier this month and Jacinta Green of @pinkmimosabyjasinta was having a UFO Challenge.  She is a feisty baby who I knew would NOT let me get away without finishing a project on her watch, so I decided to commit! When I committed I had three weeks to complete the dress.
Three weeks was a great amount of time because it allowed me to procrastinate, finally cut out the ruffles, bullshit and still meet my deadline.  After all these years it's done!  Now, let me explain, it's not a dress for the new sewer at all. (Which fooled me) Back in 2010 I considered myself an intermediate sewist until I purchased this pattern. I knew the ruffles had me. I considered buying ruffles, but like I said, I loved the fabric and the dress and I knew the ruffles would up my skills and look cool too. So, in the bin it went and I've been peeking at it ever since.
Well - I DID IT! I DID IT! I DID IT!  I'm so excited about this dress. I'm so glad I refused to toss this project!
Sewing and cutting the BIAS cut ruffles (yea, I said bias) and placing them on the dress was a big hassle but it was worth it in the end. I won't be doing it again tho! LOL!! I can add this to my list of sewing accomplishments. I added a weft interfacing to the hem which allowed me to sew an invisible hem. It also added some nice body to the hem and split on the dress.
I added green beads to the neck ties for fun and lengthened the belt considerably. It was crazy short! I think they meant to print "cut two" instead of "cut one" on the pattern piece. 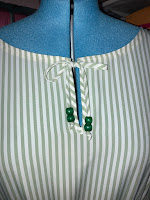 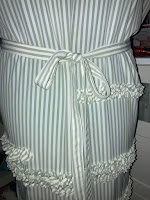 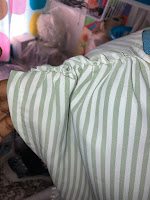